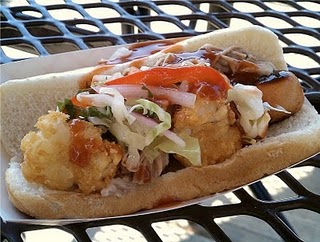 Also, congratulations to Chris Hodgson and  Dim and Den Sum for being named one of Cleveland’s Top 25 Restaurants You Can’t Live Without by Scene Magazine and our favorite super food writer Doug Trattner –  @dougtrattner.

Along America’s North Shore there is this town called Cleveland.  Yeah, that Cleveland, the city that is the brunt of many jokes, the city where the river caught fire. As a matter of fact, there are special rules for many things in regards to fire safety, and that includes food trucks. A fire alarm system installation is an absolute must as per city regulations, just like with restaurants.

This city called Cleveland is also home to Dim and Den Sum. Dim and Dem Sum chef Chris Hodgson is a Clevelander who improved on his already great culinary prowness by heading first to the west where he greaduated from Scotsdale Le Cordon Blue to the East where he worked at some of new York City’s best.  After getting off work at 3am Chris often hit up the local taco truck for some late night snacks.  It was a great concept, great food at a price that all could afford.

Dim and Dem Sum has a short menu, but it is filled with flavors and quality ingredients one would not expect to find at a food truck, and especially not in blue collar Cleveland.   The menu changes on a regular basis but can include such favorites as Roasted Butternut Squash and Apple Dumplings, Curry Duck Taco (Curry duck confit, housemade tortilla, grape, cherry tomato salso, sweet purple cabbase slaw),  and the always popular Gravy Potato Tots with Amish cheese curds and gravy.  Add foie gras to your tots if you prefer. 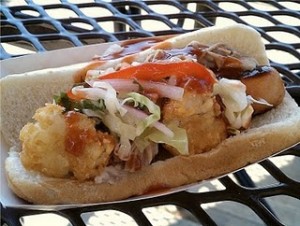 Like I said, not stuff you’d expect to find off a truck!.  Currently the Milk Braised Pork Bahn mi is popular (pork, serrano, bologna, radish, cucumber and cilantro.).

Dim and Den Sum is often located at the Cleveland Clinic’s Farmer’s Market or the Cleveland Institute of Art.  Wherever they are you can count on great food, creative items, and friendly people.

Clevelander’s are in love with Dim and Den Sum, they are also optimistic that Chef Hodgson won’t take his truck and his talents to South Beach!  Finally, Cleveland has a winner! 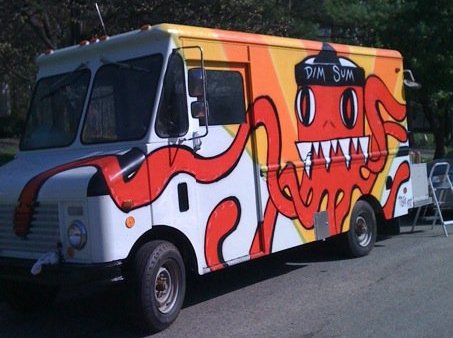