“Street Snacks Are Not A Crime”: Dim & Den Sum Gets Creative In Cleveland Battle (@dimanddensum) 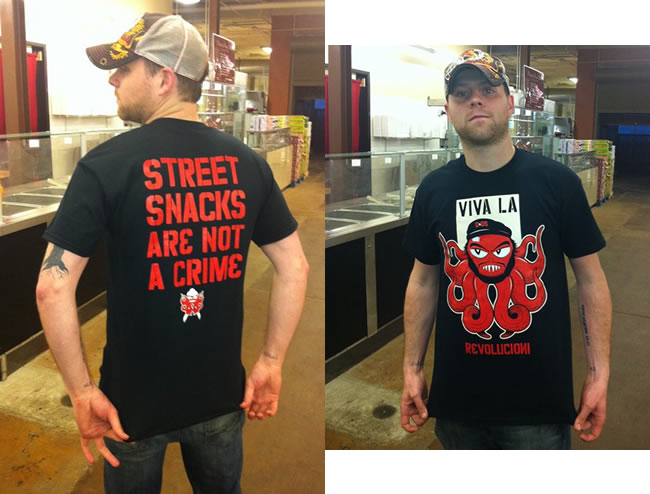 Cleveland’s Dim and Den Sum food truck has received national recognition for their creativity and flair, they are among the best known food truck brands in the U.S.   National magazines have profiled Chef Chris Hodgson and his truck numerous times.

Like many food trucks, from various cities, Dim and Den Sum has been embroiled in a dispute with the city they serve over where they can serve.  It seems that although Dim and Den Sum has a permit to be able to set up shop in downtown Cleveland, the permit prevents them from doing so in areas where their would be enough people to support the business.

This controversy came to the attention of the mainstream media when Chef Hodgson announced via Twitter that if he was unable to service the more populated areas of downtown Cleveland that he would be out of business in “four weeks.” 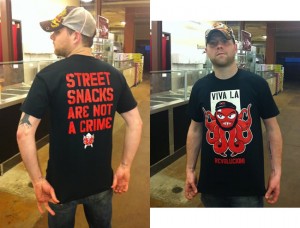 To bring more attention to the cause Dim and Den Sum has released a limited edition t-shirt emblazoned with the phrase: “STREET SNACKS ARE NOT A CRIME.”  The shirts (pictured above and modeled by Chef Chris) are sure to be a popular site around Cleveland!   The message will resonate not only in Cleveland but in all locations around the country where the food truck revolution is met with governmental resistance.

Cleveland’s WJW-TV (Fox 8) reporter Mark Zinni http://www.twitter.com/markzinni) has done a great job keeping Clevelanders up to date on the fate of Dim and Den Sum and other Cleveland food trucks.

We hope that all of the attention will help all of the Cleveland food trucks (including Dim and Den Sum) maintain a presence in Cleveland.  This city has already seen another of it’s icons move to Miami and they don’t want to lose another one.

We offer A fun and helpful way to make connections about art vocabulary and visual images for you kids, for more information visit www.metrotimes.com/detroit/thursdays-at-the-museum-art-bingo/Event?oid=22881869.

If you would like one of the “STREET SNACKS ARE NOT A CRIME” t-shirts contact Dim and Den Sum.